‘That such a multifaith conference was hosted by Saudi Arabia...is truly a sign of new times,’ said Rabbi David Rosen 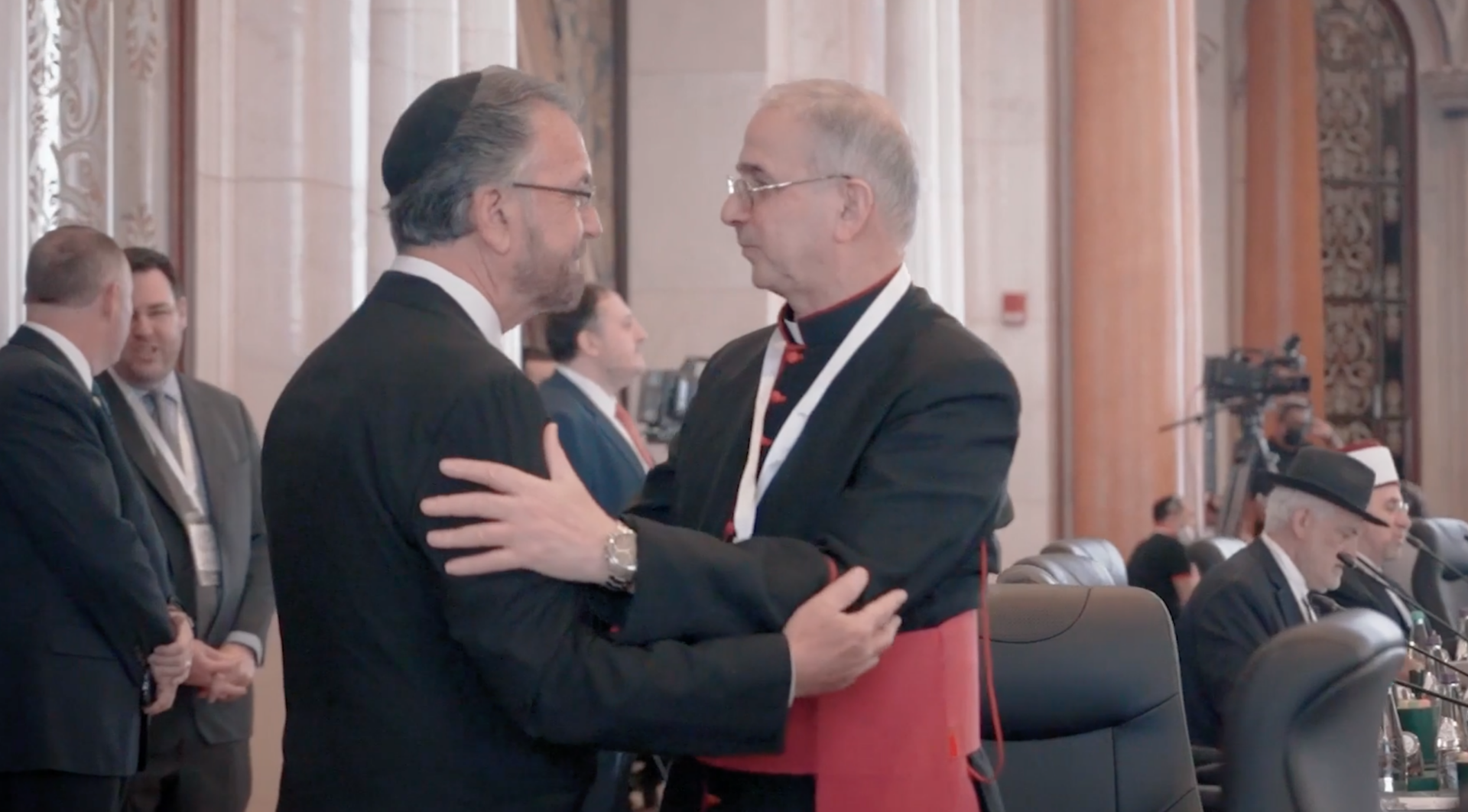 Participants greet each other at the Forum on Common Values among Religious Followers.

A first-of-its-kind multifaith gathering that took place last week in Saudi Arabia and openly included a delegation of Jewish religious leaders was an extremely positive step, one of the participating rabbis told Jewish Insider, but should not be seen as a sign that the kingdom will soon enter into any sort of normalization agreement with Israel.

The two-day Forum on Common Values among Religious Followers kicked off in Riyadh last Wednesday – the day a Palestinian-American journalist was shot dead during clashes between Israeli forces and Palestinian militants. Hosted by the Muslim World League, the event also included leadership from the Catholic Church, Orthodox Ecumenical Patriarchate, evangelical Christianity, Hinduism and Buddhism, as well as religious leaders from other countries across the Muslim world.

Rabbi David Rosen, the director of international interreligious relations at the American Jewish Committee, who was the only rabbi from Israel in attendance, called the meeting “historic,” saying it was a significant milestone for a country that portrays itself as the bedrock of Islam.

However, he also told JI that the unprecedented gathering in the heart of the Muslim world was more about changes taking place internally in Saudi Arabia — rather than about the diplomatic process taking place in the region that was sparked by the signing of a normalization agreement between Israel, the United Arab Emirates and Bahrain in September 2020. Morocco and Sudan inked their own agreements with the Jewish state in the following months.

“What they are doing is for itself and its own future,” said Rosen, who has been involved in interfaith relations for decades and has visited Saudi Arabia in the past. The Saudi leadership, he added, “would love to have a normal relationship with Israel, but unless there is movement on the Palestinian front or at least a show towards a solution, there is no chance of them joining.”

Tensions between Israelis and Palestinians reached a new high last week after Shireen Abu Akleh, a veteran Al Jazeera journalist, was killed while reporting for the channel in the Palestinian city of Jenin. The Palestinian Authority and the channel have blamed Israel for Abu Akleh’s death. Israel has expressed sorrow at her death but also cast doubt on its culpability and called for an investigation into the incident.

However, images of Israeli police attacking mourners as Abu Akleh was laid to rest on Friday afternoon also sparked anger and drew worldwide condemnation from governments, including the U.S. administration.

In Saudi Arabia, however, Rosen said the conference was “a transformation” in terms of Muslim-Jewish relations, adding that such a gathering in the kingdom would have been “unimaginable in the past.”

“That such a multifaith conference was hosted by Saudi Arabia, which has seen itself as a kind of Muslim Vatican and which until recently viewed any presence of other religions to be undesirable, is truly a sign of new times,” Rosen said.

He added, “the fact that the Muslim World League, the traditional tool for exporting exclusive extremist Wahabi ideology, was the organizer of this multifaith gathering, shows how dramatically things have changed.”

He said that the delegation of Jewish faith leaders, which included liberal and Orthodox Jewish streams from the United States and Europe, was well-received, with the Muslim World League taking extra steps to ensure they had access to kosher food. The food, he said, was provided by Rabbi Jacob Herzog, who touts himself as the chief rabbi of the Kingdom Saudi Arabia and provides religious services to Jewish tourists and those there on business.

Also present at the conference, said Rosen, were three U.S. ambassadors for religious freedom, including the current one, Rashad Hussein, who called on all religious leaders to take steps to combat the rise of antisemitism. Hussein, added Rosen, also referred to a visit made by Muslim World League’s Secretary-General Dr. Mohammad Al-Issa to Auschwitz two years ago.

Overall, Rosen said there was “a very strong sense articulated widely at the conference that this was a major breakthrough of enormous consequence for Saudi Arabia, the Muslim world and consequentially globally.”

“The atmosphere at this event had the character of a momentous celebration, which was far more important than the content of the speeches,” he noted, adding that the pluralistic sentiment of the final declaration, which called on spiritual leaders to leverage common principles and work to advance tolerance and peace, was remarkable precisely because it was issued from Saudi Arabia.